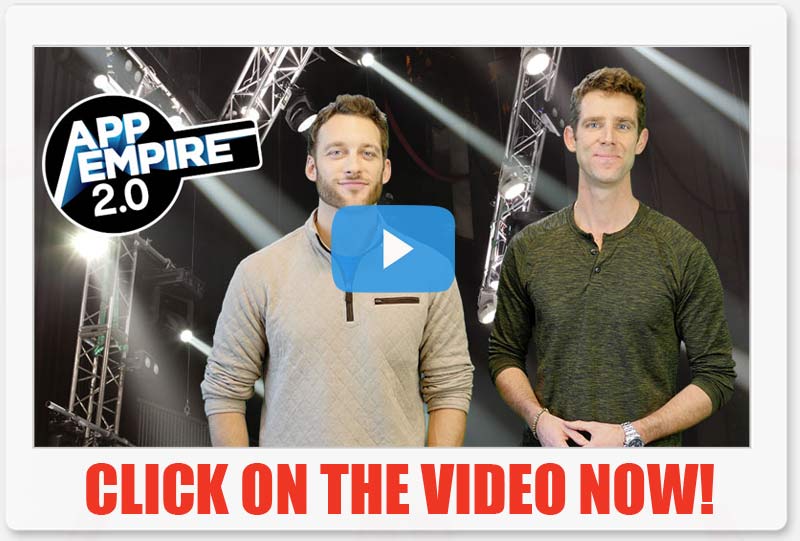 Just imagine a business you can keep in your pocket. Imagine a business that’s so unique that you can run it from anywhere in the world, with nothing more than your smartphone. This business opportunity lets you set your own working hours and live the life you’ve always dreamed of, living on your own terms.

Imagine a business so simple and straightforward that entrepreneurs from ages 10 to 80 have been incredibly successful. You don’t have to imagine anymore, because this business is as real as it gets. It’s called App Empire 2.0 and it’s already one of the most successful business opportunities of the century.

Mobile apps have now become bigger than the whole Hollywood film industry. With Apple’s App Store alone bringing in more than $20 billion in revenue last year, this industry is literally skyrocketing. Best of all, it’s not just Google and Apple cashing in. App store developers too honed more than $14 billion in 2015 – almost 70% of the total amount.

The mobile industry has doubled in just two years, and it’s showing no signs of stopping. This business behemoth already helped tens of thousands of people from all around the world make their lives easier and enjoy a whole new degree of freedom.

At Amazing.com, we help pave the way for people to grasp the most important concepts of online business education. We teach people the most simple and effective ways to build their own business from scratch. Naturally, we set out looking for the best system to build high revenue app businesses.

We wanted to know how to bring the hottest business on the planet to everyday people. To figure that out, we needed to answer a very simple question: “How exactly does the app business become so profitable for so many entrepreneurs?”

We found the answer to the above question by talking with two mobile marketing experts: Chad Mureta and Carter Thomas. Both of these guys grew up in regular families and were not helped in any way when following their passion and becoming prominent mobile marketers. Against all odds, they became two of the most successful internet marketers in the US.

App Empire 2.0 is practically a joint venture of two powerful app empires, owned by Mureta and Thomas, respectively. They have merged their companies together to create the ultimate system for people who want to leverage the power of the app marketing industry.

How Did It All Start?

In 2012, after Chad Mureta wrote and published his bestselling book titled “App Empire”, he decided to create a video training program by the same name. Originally made as a supplement to his book, App Empire soon become a standalone entity and one of the most successful business training programs to ever hit the market.

The App Empire course got such great results for its members that people have been asking Chad for months when he would release the second version of the program. Even though in the beginning Chad did not intend to release a second version, he reconsidered when he met Carter Thomas.

Once these two guys met each other, they decided to use the Amazing.com platform to bring this lucrative business model to entrepreneurs from all around the globe. They have also decided to debunk the most common myths about mobile marketing in order to help people understand why App Empire 2.0 is suitable for them.

Myth 1 – You Have to be a Tech Wizard

This couldn’t be further from the truth. Both Chad Mureta and Carter Thomas are no tech wizards. In fact, they could be considered mediocre by any average online marketer or webmaster. Bottom line: to take advantage of this business opportunity, you don’t need any skills whatsoever.

Myth 2 – You need a Lot of Money to Get Started

Most people think that you need to spend at least $10k in order to get started in a business. This is again proven to be untrue by the countless men and women who have managed to enjoy tremendous success using App Empire.

Myth 3 – There’s Way too Much Competition

With high competition and an even larger market, this industry is ready to help you thrive and achieve your wildest financial goals.

We live in a crazy world where most people work more than the regular 40 hours a week. However, with this business opportunity, you can start small with just one hour a day. Soon enough, you will be able to replace your current day job with the App Empire 2.0 business opportunity.

This opportunity gives you a very linear progression, and you will never have to spend more than 8 hours a day working unless you want to earn more. Even so, you can hire developers and outsource your projects to make more money while saving precious time.

To be part of this mobile revolution, you can live anywhere, as long as you have a stable internet connection on your mobile and laptop.

Myth 6 – Nobody will See my App

That’s exactly what the creators of this program will teach you – how to market your app the right way so that people will notice it.

Some people believe that mobile apps marketing is very similar to internet marketing. Speaking bluntly, these two categories are completely different. In many places around the world, mainly Africa and Asia, people are actually skipping computers in order to take advantage of the mobile market.

With mobile marketing, not only do you have more engagement, but you enjoy a huge opportunity that will not go away too easily.

Another myth is that this business is just a fad, something that will go away. People who think that fail to realize that nobody will stop using mobile phones anytime soon. Just look at the number of phones that are outselling computers. This trend is just the beginning. The world is becoming more “mobile” than ever.

There is no doubt that the app economy is booming and it’s not going to stop anytime soon. As mobile adoption continues to explode all around the world, apps will continue to redefine how we live and think.

App Empire 2.0 is the opportunity of the century for anyone tired of a boring job and willing to become part of a thriving and loving community of people who help each other succeed. Leverage this unique opportunity and transform your life for good!